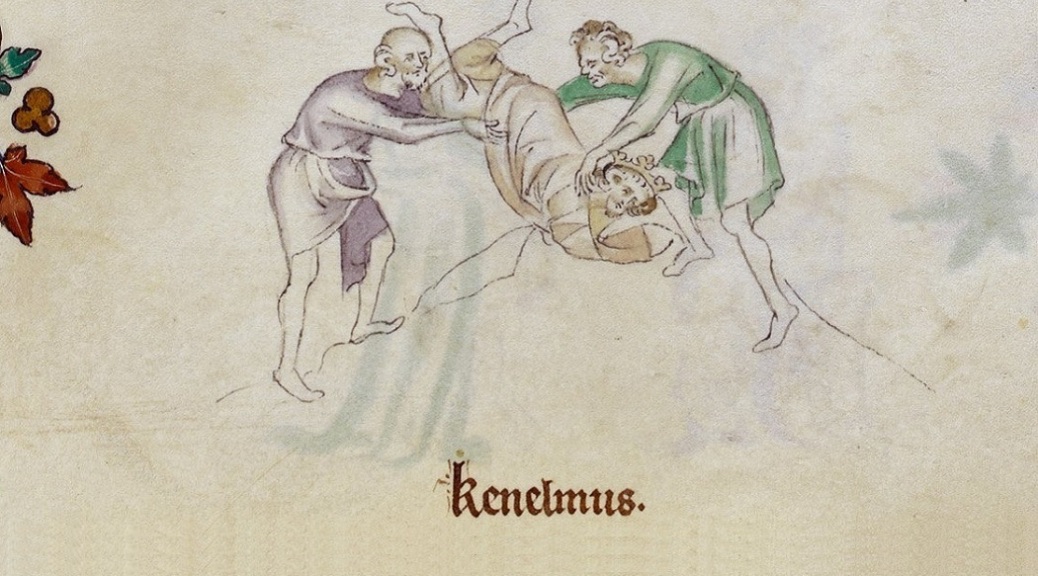 Killed by his sister Cwoenthryth in 819, King Kenelm of Mercia – a lad of a mere seven years – spent less than a year on his throne before meeting a martyr’s death. Or so goes the 819 chronicle entry of John of Worcester. There is an immediate problem, however, for any modern historian writing a biographical account of Kenelm: he probably didn’t exist. Or, more accurately, a seven-year-old Mercian prince name Kenelm who took the throne upon the death of his father and was subsequently murdered by his traitorous sister (and had an extremely active afterlife) almost certainly did not exist. Yet this is the narrative of the Vita et miracula S. Kenelmi, the source that informed John of Worcester’s chronicle entry, and this is the Kenelm that I will be looking at here. Once again, as with Edward the Martyr, our sources dictate that a biography of an Anglo-Saxon royal saint will focus more upon his death than his life. However, in this case we also have treacherous sisters and eyes popping out of heads…

Kenelm was the son of the Mercian King Coenwulf (r. 796 – 821) and this historical Kenelm is easily dispensed with. There are few references to him within the contemporary historical record. The only charter to mention Kenelm as the ‘king’s son’ is a forgery and, while the evidence of other charters indicate a man named Cynehelm was a high-ranking member of the Mercian court, he died around 812 having never claimed the throne. A single papal grant of 799 providing Kenelm and his issue lands in Glastonbury seems genuine, and it is this that most historians rely on as a positive identification of a Kenelm who was the son of the Mercian king.

Notably though, not one of the historical records of Kenelm’s life can fit within the timeline of the Vita et miracula – according to which the seven-year-old Kenelm died in 819, and was therefore born in 812. This means that the known noble Cynehelm died in the year that Kenelm was born; that the papal grant was given to Kenelm twenty years before his birth; and that Kenelm ascended the throne two years before his father was done with it. Two things can be concluded from this mess. Firstly, that can be positively asserted from the historical evidence is that Coenwulf had a son named Kenelm who lived into adulthood yet predeceased his father, thus never attaining the throne. And secondly, that the Vita et miracula S. Kenelmi was not intended as historical record, whatever John of Worcester may think.

Though Kenelm was an early ninth-century figure, his life is recorded in a mid-eleventh century manuscript and, as such, the Vita et miracula is a product of late Anglo-Saxon hagiography and reflects the cultural concerns of eleventh-century England upon the cusp of the Conquest. Indeed, that it was at this late point that Kenelm’s passio was committed to parchment likely reflects a frenzy of hagiographical biography inspired by the murder of Edward the Martyr. The parallels between the central plot of the Passio S. Eadwardi and the Vita et miracula S. Kenelmi are immediately obvious, particularly in the person of the treacherous woman. Setting aside any dispute over historical accuracy v. narrative causality as per that particular trope, both hagiographies record the assassination of a young Anglo-Saxon king at the hands of a close female family member lusting for power.

The Vita et miracula records Kenelm’s inheritance of the kingship in accordance with his father’s wishes, but that ‘Cwoenthryth, goaded by savage envy and an ambition to rule, lay in wait for him…’.  Cwoenthryth did not personally kill Kenelm (just as Edward the Martyr’s step-mother did not herself hold the dagger), but rather convinced Kenelm’s tutor to undertake the deed. While the narrative plays up the tutor’s moral indecision – and Kenelm’s miraculous innocence – over seven chapters of prose, the young king’s death is recorded as a simple beheading in once sentence. (The addition of the authorial note that Kenelm caught his own head is a nice touch, and makes Kenelm one of not an insignificant number of cephalophores in Anglo-Saxon hagiology). In detail, this narrative holds no historical accuracy. The real details of Kenelm’s life and death were likely already obscured by the passage of time by the time of its writing, and there is no evidence of a cult of S. Kenelm prior to 970.  Indeed, as noted, there is no contemporary evidence that Kenelm ever ascended the throne of Mercia, nor that he died a martyr’s death. Similarly, though she is a better attested historical figure than Kenelm, there is no evidence of Cwoenthryth’s supposed repudiation as a consequence of her brother’s murder.

So, as we have established that the central event of the Vita et Miracula is largely a product of authorial invention, we may as well run with it and deal with the fate of Kenelm’s treacherous sister.  The author paints a miraculous scene in which the crime of Cwoenthryth and her accomplices is made known through divine intervention to Pope Leo III, who sends an expedition to recover Kenelm’s body. Upon seeing the joy and adulation of the people translating her brother’s body from his ignominious grave to a resting place at Winchcombe Abbey, Cwoenthryth set about cursing her brother’s memory by chanting Psalm 108 backwards; in a graphic description the author describes the curse recoiling on Cwoenthryth:

…straightway, both her eyes, rooted out from their sockets, dropped upon the very page she was reading.  That same psalter, adorned with silver, still shows the proof of this chastisement, stained on the same sentence with the blood of the fallen eye-balls.

Cwoenthryth dies in disgrace having lost the crown she had snatched, with the account focussing upon the physical detail of the loss of the eyes, while making clear the crimes for which divine justice was meted out.  The commentary of the author is subtle, but the physical blindness must be considered as a somewhat felicitous punishment for the spiritual blindness Cwoenthryth displayed in her life. That the psalter ‘still shows the proof of this chastisement’ is of particular note, for the relic of the stained psalter is in fact an attestation to her crimes that has greater permanency than a visibly mutilated and blinded, yet ephemeral, body. And it is a relic with an entertaining afterlife.

In his Journey Through Wales, written over a century after the Vita, Gerald of Wales relates a miracle in which a fornicating monk of Winchcombe, carrying a psalter in the abbey’s procession for the feast of S. Kenelm, finds the psalter stuck to his hands until he repents his sin. Gerald identifies this psalter as that which bore the stains of Cwoenthryth’s divine blinding and provides a summation of that event that is a clear borrowing from the Vita. Yet it is interesting that Gerald would seek to revive the narrative with a contemporary attribution of divine intervention.

It is known that Kenelm’s cult was focussed upon Winchcombe, and Gerald’s tale indicates that the story retained some importance in the town three centuries after the alleged event and a century after its documentation. This is unsurprising if Winchcombe was indeed a pilgrimage centre for the cult of Kenelm, which seems likely. The cathedral at Winchcombe went through two rededications between 970 and 1070, the first representing an Anglo-Saxon revival, the second the introduction of the Norman church. It seems likely that the authorship of the Vita et Miracula was intended to accompany one of these events, and the author places much of Kenelm’s posthumous miracle-making within Winchcombe’s geographical bounds. Gerald’s narrative displays a sound knowledge of local lore, demonstrating the extent to which the martyrdom of a highly fictionalise Anglo-Saxon boy-king became entrenched within English hagiographical tradition.

So where does this somewhat rambling examination of the historical life, and the mythologised death of Kenelm leave us? Firstly it is clear that I have a somewhat unusual interest in the trope of blinding in medieval narrative as the vehicle for the deprivation of power and social normalcy. Secondly that, more so than many other Anglo-Saxon saints’ lives, Kenelm is largely the product of authorial invention. And lastly that, the historical accuracy of Kenelm’s hagiography is secondary to its illumination of the cultural context in which it was written.

Wicked Queens and Martyred Kings – the 794 Beheading of S. Æthelberht of East Anglia

See our bibliographies on Hagiography and Chronicle Editions.

5 thoughts on “Wicked Queens and Martyred Kings – the 819 Murder of S. Kenelm of Mercia”