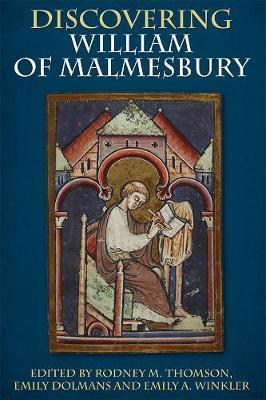 Over the past forty years, Rodney Thomson has established himself as the authority on the life and works of William of Malmesbury. It is reassuring then for scholars of England’s foremost twelfth-century historian to find Thomson’s name attached to a project such as Discovering William of Malmesbury. What is perhaps even more reassuring, is that this edited volume of eighteen chapters gives ample evidence that interest in William of Malmesbury remains strong among a new generation of scholars, and that the future study of his legacy is in good hands.

The contributions to this volume display the impressive breadth of scholarship on William and his works currently being undertaken–from William’s conceptualisation of history and his place in the historiography of twelfth-century England, through to his portrayal of the Jews, his perception of the Britons, and his understanding of kingship. However, considering that there are eighteen individual contributions and the book is only 224 pages in length, it is of note that each study is (perhaps surprisingly) brief. This in itself is not problematic, and the tight focus and contained argument of each chapter is a credit to both the editors and the authors. Yet, with so many contributions, the reader may reasonably expect to be guided by the thematic division of chapters which have become the norm of edited volumes, this is lacking. The net effect is to create the impression of a compilation of independent studies, rather than an integrated collection in which the contributions are in conversation. But this is a small criticism. It is an excellent book, to be thoroughly recommended.

William provides scholars not only a glimpse of history as a record of events, but in the very process of writing provides a lens through which to understand the social, political, and cultural milieu in which he lived and operated. It is a duality that editors Emily Dolmans and Emily A. Winkler highlight in their introduction, asserting the aim of the volume is ‘to present an image of William as subject and object’ (p.3). They thus identify two thematic concerns to the studies in the volume. First, ‘William the man’ (p.5-7), the ambitious historian and scholar, more interested in learning than the pursuit of direct political agency. Second, ‘William’s works’ (p.8-10), writings that catered to a wide range of audiences, to his own thirst for knowledge and its preservation, incorporating elements of by historiography, of hagiography, of philosophy. This proposed demarcation of the man and his works is not quite as clear as the introduction implies (our knowledge of William’s life comes entirely from his own writings), yet it does hold broadly true of the studies that follow.

Granted the breadth and number of contributions to Discovering William of Malmesbury, we must content ourselves with an overview of a few especially noteworthy chapters of each type. In chapter 2 Anne E. Bailey chapter assesses the utility of notions of genre in Gesta Pontificum Anglorum, examining the blend of history and hagiography characteristic of the work. Bailey’s study can be applied across all of William’s works (and even more broadly across twelfth-century English histories) for, as she notes, history mixes with hagiography throughout William’s entire corpus, it is simply more evident in Gesta Pontificum Anglorum. Bailey ably demonstrates William’s skilled synthesis of multiple sources to augment his narratives, both historical and hagiographical, and that in the resultant biographies William himself consciously shifted between history and hagiography. Suggesting that William’s intent was to relate ‘heritage’ rather than ‘history’ (p.25), Bailey concludes that William was deliberate in constructing narratives that preserved regional traditions.

In chapter 4, John Gillingham looks at William’s portrayals of William II and Henry I, arguing that William preserves a far more nuanced view of both kings than that offered by his contemporaries and successors. Moreover, Gillingham proposes that modern scholarship tends to accept William’s portrayal of both men at face value, suggesting that a close reading of Gesta Regum Anglorum reveals a portrait of William II that is not wholly unsympathetic, and one of Henry I that is not wholly untarnished. Ryan Kemp picks up on the theme of kingship in chapter 6, examining the relationships between kings, bishops, and saints as represented across William’s writings. Kemp draws attention to William’s partnering of great kings with powerful clerical advisers in his narratives, arguing that William partook of a tradition that saw clerical oversight as essential for secular governance, whether as a partner to good king, or a reprimand to a bad one. It is a theme picked up by Alheydis Plassman in chapter 12 in a comparative study of the models of right kingship provided by William of Malmesbury and Otto of Freising. Plassman demonstrates that in the ‘rules of rise and fall’ (p.151), William and Otto create analogous models of historical discourse, though their intent and methodologies differed.

With thirteen other contributions as varied as those highlighted here, Discovering William of Malmesbury is a rewarding book for scholars of twelfth-century England. The book lives up to its title, the innovative approaches to William’s life and works it contains proposing new discoveries, even for those already familiar with William’s legacy.